skip to main | skip to sidebar

Posted by Sajjad Khalid at 5:20 PM No comments: 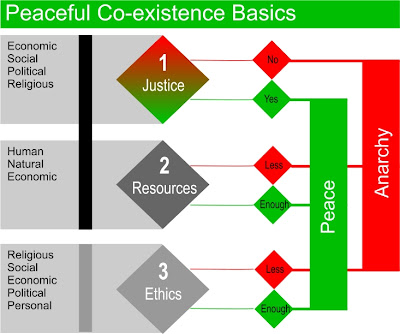 Today we are going to discuss the topic 'Peaceful Co-Existence'. I started drawing this diagram while thinking about the session.
This drawing shows the three basic components of the peace.
I have shown two extreme results like 'Peace' and ' Anarchy'. There can be endless variations of these three components.
Another aspect of the discussion may go further in detail of each component like 'what are resources or what are Ethics?
Sajjad Khalid
Posted by Sajjad Khalid at 2:57 PM No comments:

Corporate Culture: A Case of Monkey See, Monkey Do?

Did you ever wonder how your company’s culture – that set of beliefs, traditions, and behavioral norms that determines “the way things work around here” – came to be? Or why, when you try to change it, it seems so resistant? Well, here’s a little story about a scientific experiment that shows how culture comes into being and why it is so resistant.

The experimenters began with a cage, a set of externally enforced boundaries. Inside the cage, they hung a banana on a string and placed a set of stairs under it. They then introduced five monkeys into the cage. Before long, one of the monkeys started to climb the stairs toward the banana. As soon as it touched the stairs the experimenters sprayed all the other monkeys with really cold water. When another monkey made an attempt to get the banana they again sprayed the other monkeys with cold water. After a while the monkeys prevented any of their group from going after the banana.

After the cultural prohibition against “going for the banana” had been established the experimenters put away the cold water. They took one of the original monkeys out of the cage and introduced a new one. Upon spotting the banana the new monkey went after it. To its surprise and dismay all of the other monkeys attacked it. After another attempt and attack the new monkey learned that if it tried to climb the stairs and get the banana it would be assaulted and so it stopped going after the banana. It had been acculturated, assimilated into the cage’s “don’t go for the banana” culture.

Next the experimenters removed another of the original five monkeys and replaced it with another new one. The second new monkey went to the stairs and predictably it was attacked. The first new monkey took part in this punishment with enthusiasm! Similarly a third original monkey was replaced with a new one, then a fourth, then the fifth.

Every time the newest monkey took to the stairs it was attacked by the other monkeys. Most of the monkeys that were beating it had no idea why they were not permitted to climb the stairs or why they were participating in the beating of the newest monkey. After all the original monkeys were replaced none of the remaining monkeys had ever been sprayed with cold water. Nevertheless, no monkey ever approached the stairs to try for the banana. Why not? Because as far as they knew: “That's the way it's always been done around here.”

And that is how a company’s culture is formed: Acceptable and unacceptable behaviors are initially established in response to important external events but, over time, all that remains are strongly-held notions about what is and what isn’t acceptable behavior. The origins of these beliefs vanish with the departure of the members of the group who were present when the patterns and standards were initially established. In a long-lived organization, there might be no members left who know why a given behavior is considered acceptable or unacceptable. Yet all members of the organization are quick to enforce whatever the cultural standards might be.

So how do you break out of this culture trap? Well, you start by trying to find out what’s behind those cultural do’s and don’ts. Why is this expected or required? Why is that prohibited? And don’t accept “That’s the way things are done around here” as an answer. In some cases, you might find there are very good reasons for this or that prohibition or requirement. In others you won’t. In all cases, what you’re out to accomplish is to eliminate blind adherence to behavioral norms.

If you want to prevent hardening of the cultural arteries, try this: Every two or three years, conduct a simple cultural audit (see the decision tree below). Identify whatever behavioral norms are at work and determine why they are in place. See if they are still valid. None of this means that all or even any cultural standards will be eliminated; what it does mean is that if they no longer make any sense you can probably do away with them and, if they are to stay in place, people will know why – and your company’s culture will make sense instead of simply being a case of monkey see, monkey do.

About the Author: My name is Fred Nickols. I am a writer, an independent consultant and a former executive. Visual aids of one kind or another have played a central role in my work for many years. My goals in writing for SmartDraw’s Working Smarter blog are to: (1) provide you with some first-rate content you can’t get anywhere else, (2) illustrate how important good visuals can be in communicating such content and (3) illustrate also the critical role visuals can play in solving the kinds of problems we encounter in the workplace. I encourage you to comment on my posts and to contact me directly if you want to pursue a more in-depth discussion.

Unknown Calligrapher. One of the finest works in Nastaaliq 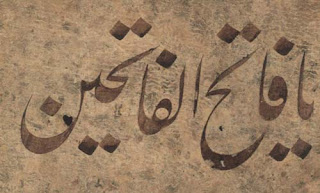 Posted by Sajjad Khalid at 3:26 PM No comments:

An excercise written by Ahmad Al Umari in Khat-e-Naskh 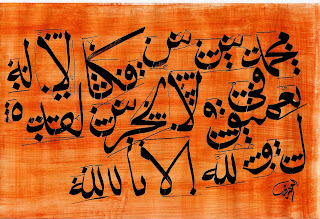 Posted by Sajjad Khalid at 3:20 PM No comments:

A ceremony for the Distribution of Awards will be held at Alhamra Arts Council, The Mall,
Lahore, 30 November, 2007. Result of International Calligraphy Competition will be announced.
Pakistan Calligraph Artists' Guild
Posted by Sajjad Khalid at 4:01 PM No comments:

Three books out of five are published today, only enlarged images of "Nazm-e-Parvin" will be uploaded later. Find these books at the home page od http://calligraphyislamic.com
Posted by Sajjad Khalid at 6:59 PM 1 comment:

Next Group of the books on Nastaliq Script

Posted by Sajjad Khalid at 1:32 PM No comments:

We are pleased to announce that a project to publish books regarding classical and technical details of nastaliq script being used for Urdu, punjabi, persian, pushto, sindhi, kashmiri and other muslim languages is started. Initially we will present 5 books including;
Posted by Sajjad Khalid at 1:29 PM 4 comments:

Pakistan Calligraph-artists' Guild is holding an International Calligraphy Competition and Exhibitions at Lahore on 23rd Nov 2007 at Lahore. Kindly send your works' images before sending the originals at pcg@calligraphyislamic.com
Posted by Sajjad Khalid at 5:55 PM No comments:

A Tribute to Winners of IRCICA's Calligraphy Competition 2007

Pakistan Calligraph Artists Guild has organized a meeting to pay tribute to Traditional Islamic Calligraphers for winning awards at IRCICA's Calligraphy Competition 2007.
Posted by Sajjad Khalid at 1:34 PM No comments:

Exhibition of Study of Traditional Ornamentation

Create your personalized account on http://calligraphyislamic.com and get 2 GB of space loaded with state-of-the-art tools including Gmail, Your website, Your Start Page, Your Spreadsheet, Your Document and Your Google Talk.
Signup Now to reserve your name. Google will continue offering more attractive services to the members in near future. Rush Now...............
Posted by Sajjad Khalid at 11:08 PM No comments:

Sultan Jalaluddin of Islamic Empire in Turkey was the pupil of Ustad Mustafa Raqim. He was one of the top masters of Islamic Calligraphy.
Posted by Sajjad Khalid at 12:48 PM No comments:

A Monthly Meeting for Urdu and Punjabi Literature

We are going to restart the Monthly Meeting regarding Urdu and Punjabi Literature appreciation and criticism at Lahore. Kindly send your mailing address and Phone Number to enable us send you the invitation.
Place: Al-Mawrid's Library, 51-K, Model Town, Lahore.
Time: After Maghrib Prayer (Please come before Maghrib)
Date: Will be decided after 7th of April, 2007.
If you want to present your literary works, kindly submit it to sajjadkhalid@gmail.com. There are two segments of the program. First part for new writers to present their works. Second part is dedicated for serious criticism for senior writers.
You may suggest to change the program.

Posted by Sajjad Khalid at 1:07 PM No comments:

OZCAY.COM
This website is made with Flash. It has two sections with the names of two brothers. Some times site is not able to load its images database. Keep trying.
Posted by Sajjad Khalid at 1:00 PM No comments:

Does Islam restrict us to a specific language, dress, custom, region or art?

Does Islam restrict us to a specific language, dress, custom, region or art?
Dear Friends, Kindly send your posts on this topic.
Posted by Sajjad Khalid at 1:59 PM 1 comment:

by Muhammad Ali Zahid
Posted by Sajjad Khalid at 3:23 PM No comments: 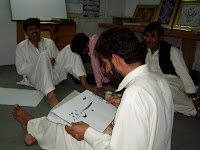 One of the snaps taken in my office while conducting a meeting of Pakistani Calligraphers for mutual understanding and sharing of their experiences. In front of all Mr. Ahmad Ali Bhutta is doing Exercise Mashq of the Nastaaliq script. In Back groung (Left to right) Mr. Muhammad Ali Zahid, Ashraf Heera and Muhammad Basit are sitting.
Photograph by Sajjad Khalid
Posted by Sajjad Khalid at 2:52 PM No comments:

Posted by Sajjad Khalid at 1:20 PM No comments:

I need your comments on Khat and composition.
Posted by Sajjad Khalid at 7:10 PM 2 comments:

Its my original composition of "Allahu Wahdahu" in Thuluth Style
Posted by Sajjad Khalid at 6:21 PM No comments:

Dear Friends, (Saeed Sahab, Mudassir Sahab, Almas Sahab, Asghar Sahab, Rana Sahab,)
I have started this topic for our interaction. All of you are invited here to share your photos, writings, thoughts and links.
Enjoy
Posted by Sajjad Khalid at 5:42 PM 2 comments:

Assalam-u-Alaikum,
I've designed a website http://calligraphyislamic.com to promote calligraphy as one of the most popular arts of Islamic Civilization. I need people to visit and send their comments.
Sajjad Khalid
Editor
CalligraphyIslamic
Posted by Sajjad Khalid at 6:45 PM No comments:

A Mashq of Two Alphabets in Thuluth Style 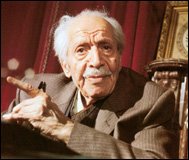